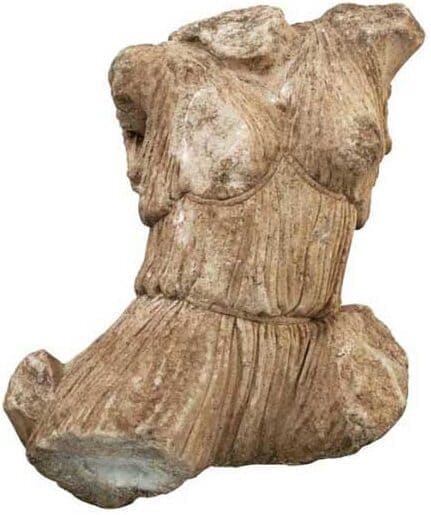 The sculpted decoration of the Tholos in the sanctuary of Athena Pronaia constitutes not only an element for dating the enigmatic monument in ca. 380-370 B.C., but also one of the landmarks of late classical sculpture and its study. Unfortunately the sculptures had been detached already in Late Antiquity. It took decades of studies and conservation works in order for the scholars to reach some conclusions and present the fragments in a more comprehensive way. According to them, the exterior metopes of the building bore representations of Amazonomachy and Centauromachy, whereas the internal frieze probably bore scenes of the heroic deeds of Hercules and Theseus, although this is not certain.

In terms of style, the figures on the exterior metopes are rendered in high relief, with intensive movement and plasticity, which reminds of the architectural sculptures of the Asclepieion of Epidaurus. The torso of an Amazon, displayed in the Museum of Delphi, although fragmentary, is very impressive with its sense of movement and the garment details. The torso is slightly twisted, in order to stress the sense of movement, evident on the upper part of the thighs and in the left hand, which must have been raised. The figure wears a himation with very delicate drapery, attached to the waist with a thin band. A second band crosses under the breast.