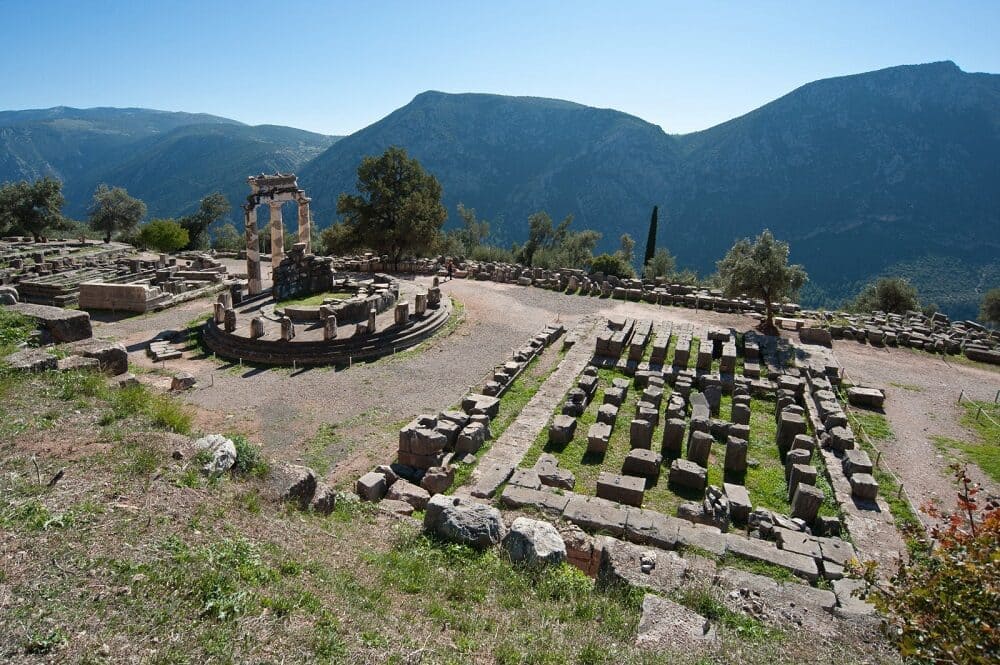 The temple of Athena Pronaia had three phases. The earlier temples (A and B) were built in the 7th and 6th centuries B.C. respectively and were made of poros stone, whereas the third one was built in the 4th century B.C. of limestone. The latter was a prostyle in antis with six columns on the facade, with a cella and vestibule, but without decoration on the metopes and pediments.

The sanctuary of Athena, as attested by the term “Pronaia”, was the first one to be seen by the visitor who came from the east. It seems that here lay one of the most ancient cultic sites, where rituals in worship of Gaia, previous “owner” of the sacred space, took place. The Mycenaean figurines which were discovered during the excavations probably constituted votive offerings, although this is not certain.

The temple of Athena Pronaia is one of the oldest buildings in Delphi with a complicated history. The first temple, made of poros stone (temple A), was built in the 7th century B.C. It was made of greyish poros stone. Twelve columns have been preserved, which probably constitute the earliest Doric architectural remains, as well as traces of its polygonal foundations. Τhe capital was low and the flutings on the columns were particularly shallow. This temple was destroyed within the first half of the 6th century B.C. It was supported by a crepis of two steps, together with the stylobate. After its destruction right on top of it was constructed the temple B (ca 510 B.C.), probably under the instigation of the Alcmaeonids. This second temple (13,25 Χ 27,46 m.) was also made of poros stone, it had no opisthodome and consisted of 12 columns on the long sides and 6 column on the narrow ones. It was decorated with clay figures on the metopes, on the pediments (from where the head of Athena comes) and on the acroteria (Victories). After the excavations 15 columns were preserved at a certain height, but they collapsed, due to a fall of rocks in 1905. Several scholars believe that this temple continued to exist even after the construction of the third temple, as they discern traces of restoration and attribute to this phase some partly preserved marble members. The marble fragments of an Athena head which have been discovered are attributed to the cult statue of Athena, situated in the cella of the temple.

As far as the third temple is concerned, we know that it was made of limestone, but recent research has expressed the view that it was perhaps not dedicated to Athena but to Artemis, following the testimony of Pausanias, who mentions that one of the temples in the sanctuary of Pronaea was a temple of Artemis. However, the traditional view remains in favour of the first goddess. It was built around 360 B.C. (or within the third quarter of the 4th century B.C) on a safer spot, to the west of the terrace. Although only the foundations are still extant, its plan has been fully restored: it was made of local limestone, it lay on a crepis of three levels and was prostyle in antis with six columns on the facade, a vestibule and a cella. Its plan was particularly well-designed in its details and had exquisite analogies. The cella was divided by the pronaos with a gate in Ionian order. On the back wall there were placed statues on bases. Several remains of the temple, particularly architectural members, have been preserved. It seems that the temple had no sculpted decoration, to the exception of the acroteria which are not extant. Perhaps the reason was that the architect wanted to create a contrast with the nearb (and by a decade or so older) Tholos, which had an intensively decorative character due to its polychromy and its sculpted decoration in relief. 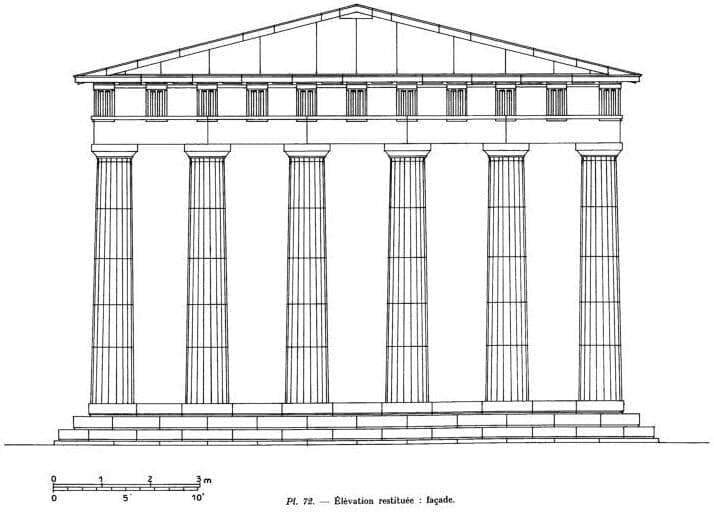 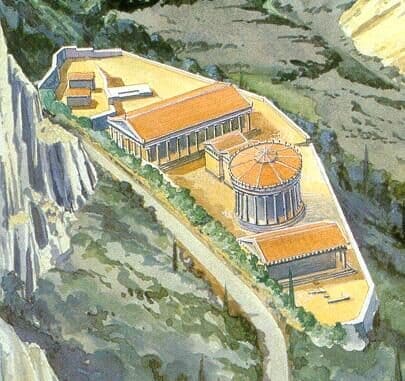